"Your whole group consists of only 14 people and a baby, yet you are optimistically planning to rescue 134 people?"
Ken replied grimly, "Do you have any idea how few people still live in this world? The tsunami, intense and prolonged cold, and the great snows have decimated the Northern Hemisphere, and we expect the Southern Hemisphere may be worse, because that was where the impact occurred. We believe that the current cold condition, which may slightly ameliorate as the volcanoes simmer down, is the new standard. We are in an ice age!"

Book 1 of the Ark Asteroid Trilogy

An e-book science fiction adventure that vividly describes the devastation of civilization following an asteroid strike
By THOMAS A. CAHILL 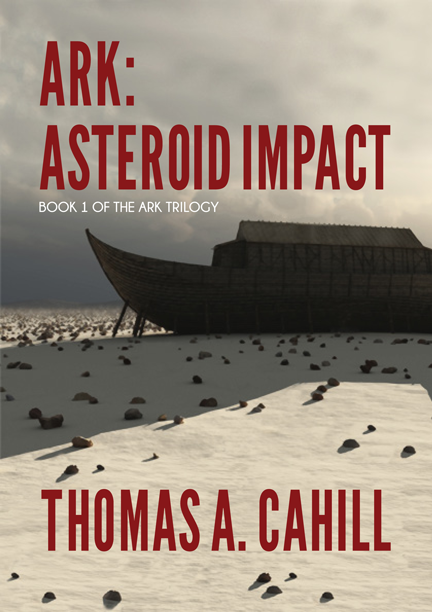 Astronomers closely monitor asteroids and other hurtling objects that approach our planet from space because of the potential cataclysm that would result from a collision with the Earth's surface. Physicists, geologists, ecologists and other scientists grimly contemplate the environmental upheaval that an impact would trigger. Internationally recognized physicist Thomas A. Cahill, Ph.D., terrifyingly transformed one potential scenario into a science fiction thriller — his second novel published under the EditPros LLC imprint.

The book, Ark: Asteroid Impact, is a gripping story about a band of Californians who take refuge and manage to survive the calamitous effects of the collision of a large asteroid with the Earth. The devastating impact shatters civilization and eradicates nearly all forms of plant and animal life on the planet. The book describes in vivid detail the survival struggles and ingenuity of refugees who find themselves marooned in the forbidding, barren, frozen environment that envelops Earth following the colossal impact.

The "Ark" in the title alludes to the quest of the survivors to rebuild civilization. They scavenge the meager resources at their disposal to improvise shelter from the punishing cold, to generate electricity, to supply food, and to devise means of transportation to search for a more suitable climate, as well as to find other survivors.

Thomas A. Cahill meticulously researched the likelihood of events described in the book. He was a professor of physics at the University of California, Davis. His early work at UCLA, in France, and in Davis, California, was in nuclear physics and astrophysics, but he soon began applying physical techniques to applied problems, especially air pollution. His data in 1973 on the impacts of airborne lead was instrumental in the adoption of the catalytic converter in California in 1976. He proposed and supported the law to lower sulfur in gasoline in 1977. He was director of both the Institute of Ecology and the Crocker Nuclear Laboratory, where his pioneering work included nondestructive analysis of ancient documents. He spent the following 20 years designing, building and running the aerosol network to protect visibility at U.S. national parks and monuments — now the national IMPROVE program.
In 1994, he founded the UC Davis DELTA Group to investigate two areas of concern — aerosols and global climate change — for the National Science Foundation (NSF) and the National Oceanic and Atmospheric Administration (NOAA). Additionally his group analyzed aerosols and human health impacts for the California Air Resources Board, American Lung Association, and the Health Effects Task Force for Breathe California of Sacramento — Emigrant Trails. Because of this health-related work, a U.S. Department of Energy colleague asked Cahill and his team to evaluate air at the excavation project following the collapse of the World Trade Center towers in the autumn of 2001. Cahill was among the first to warn that workers at the site were at risk of serious health threats from the toxic metals in the air. While he was the author or co-author of hundreds of academic articles and book chapters, this is his second work of science fiction.
In the autumn of 2018, about nine months after publication of his autobiography Critical Masses: Exposés of a Catholic Nuclear Physicist, Tom was diagnosed with myelodysplastic syndrome (MDS), a bone marrow failure disorder that interferes with the ability of the marrow to produce healthy blood cells. In the spirit of scientific inquiry, he took part in a clinical trial that helped slow but was unable to halt the progression of the disease. He died on May 1, 2019, at age 82.
Buy now