When the southern horizon lit up the entire landscape at Halcyon, almost every resident was yanked into wakefulness. It appeared that the sun was streaming through their south-facing windows, but it was midnight. Much later, a low, rolling boom was heard echoing off the mountains, reverberating for almost a minute.

Lieutenant Commander William Pierce, formerly the CEO of the Cheyenne Mountain Directorate, was counting off the seconds from the flash to the thunder. He turned to the stunned residents and said, "H-bomb at about where Vandenberg Air Force Base was located. Looks like others hit farther away, toward Santa Barbara. Alert Cheyenne Mountain! I never thought this would happen, especially not now. We are under nuclear attack!"

Book 2 of the Ark Asteroid Trilogy 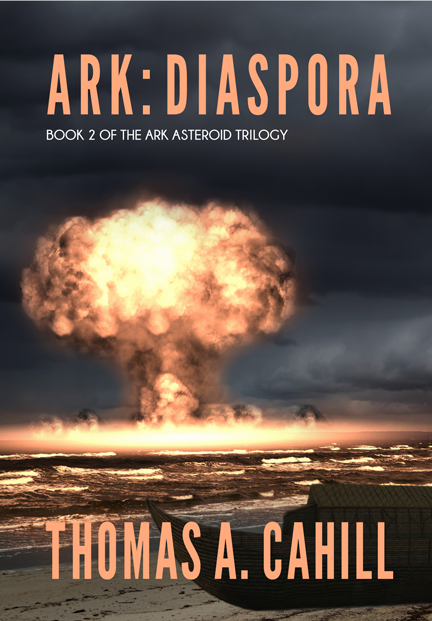 Four years had passed since a massive asteroid collided with Earth and triggered an environmental disaster that obliterated nearly all forms of life. Monumental tsunamis demolished coastal cities globally, and volcanic eruptions throughout the world belched out a veil of ash that deflected sunlight and caused a new ice age in which billions of people perished. In this forbidding world under an orange-tinged sky, small groups of humans managed to survive, as the first book in this trilogy, Ark: Asteroid Impact, describes.

Picking up where Ark: Asteroid Impact left off, Ark: Diaspora returns readers to the battered central and northern coastal areas of California four and a half years after the impact. There, colonies of refugees had managed to survive by improvising shelter using scavenged materials and cultivating cold-climate crops amid nutrient-depleted soils and brutal weather conditions. Amid crushed buildings buried in snow on the beaches of California, survivors pieced together the means to begin exploring the wounded world to see who else may remain. They used radio transmissions to contact other survivors in distant isolated snowbound locales, and altruistically rescued them using salvaged and rebuilt aircraft and snowmobile vehicles.

The California colonists were unaware, however, that the greatest threat to their survival was an unseen enemy halfway around the world. Although governments of the world's superpower nations had been rendered defunct, Russian military personnel at still-operative missile launch sites in the Ural Mountains decided to seize the opportunity to reassert Soviet-inspired animosity toward the United States. Calculating the months to their own imminent starvation, the Russians fueled five intercontinental ballistic missiles, armed with nuclear warheads, and launched them toward targets in America.

Nearly everyone was asleep in the California colonial settlement of Halcyon, north of Santa Maria. But when the southern horizon lit up the entire landscape at Halcyon, almost every resident was yanked into wakefulness. It appeared that the sun was streaming through their south-facing windows, but it was midnight. A low, rolling boom echoing off the nearby mountains reverberated for almost a minute. The survivors realized that the California coast had come under nuclear attack. The Russians had approximated but miscalculated the location of Halcyon, which did not appear on their maps. The glow rose high in the sky, turned a dull red, and a characteristic mushroom cloud formed above the site of the nearest strike.

The California colonists would learn that other Russian missile crews intent on fulfilling the Soviet ideology were poised to attack with sharper accuracy. Yet even while under the threat of instantaneous annihilation, the colonists were intent on discovering and aiding pockets of survivors in what was left of the world. To confound further attacks, the colonists conceived the evasive strategy of diaspora — dispersion to numerous other locales away from their homeland. They remained committed to their quest of building an alliance for peace and collaboratively harnessing the meager resources at their disposal to preserve human civilization.

In Ark: Diaspora, the Earth itself is the Ark in which these disconsolate but determined colonists and their allies struggle not only for the survival of species on Earth, but also for the endurance of the human spirit. They are driven by a moral imperative to create civilization anew, infused with a deep respect for the sanctity of life.

In 1994, he founded the UC Davis DELTA Group to investigate two areas of concern — aerosols and global climate change — for the National Science Foundation (NSF) and the National Oceanic and Atmospheric Administration (NOAA). Additionally his group analyzed aerosols and human health impacts for the California Air Resources Board, American Lung Association, and the Health Effects Task Force for Breathe California of Sacramento — Emigrant Trails. Because of this health-related work, a U.S. Department of Energy colleague asked Cahill and his team to evaluate air at the excavation project following the collapse of the World Trade Center towers in the autumn of 2001. Cahill was among the first to warn that workers at the site were at risk of serious health threats from the toxic metals in the air. While he was the author or co-author of hundreds of academic articles and book chapters, this is his third work of science fiction.
In the autumn of 2018, about nine months after publication of his autobiography Critical Masses: Exposés of a Catholic Nuclear Physicist, Tom was diagnosed with myelodysplastic syndrome (MDS), a bone marrow failure disorder that interferes with the ability of the marrow to produce healthy blood cells. In the spirit of scientific inquiry, he took part in a clinical trial that helped slow but was unable to halt the progression of the disease. He died on May 1, 2019, at age 82.
Buy now