“The thunderous boom was heard throughout the village. Dawn the next day revealed the lower atmosphere as a gray wall, heading toward them. Just after noon, the cloud arrived, and with it falling ash. Choking, everyone piled indoors and put wet clothes over their faces so they could breathe. Ash kept coming down, and in a few hours, almost 18 inches of it covered the ground, roofs, and rice paddies. In five days, in the dark and the ash, the last representatives of a proud and ancient culture collapsed into the dust, dying of an unquenchable thirst.”

Book 3 of the Ark Asteroid Trilogy 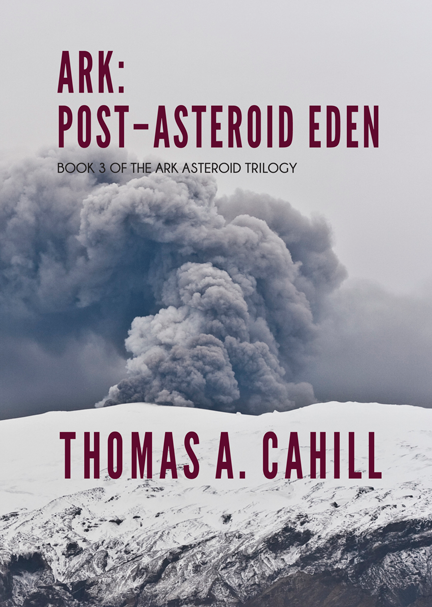 Ten years have passed since the cataclysmic collision of an immense asteroid with the Earth. Amid a decimated environment pummeled by the ravages of worldwide tsunamis, volcanic eruptions and impenetrable ash clouds, most forms of life succumbed. Yet out of the rubble of the scorched, scarred, frozen planet, a few groups of human stragglers managed to survive by seeking and improvising shelter.

One such group that took refuge on the Central Coast of California gradually, agonizingly, tenaciously discovered and nurtured remnants of mammal, marine, avian and plant life that they found. As they salvaged equipment and fuel at sites that had been buried under snow and debris, they developed capabilities to generate electricity, restore vehicles, communicate by radio, build sailing ships and repair and fly aircraft. As their technological capabilities evolved, these California “colonists” set out on increasingly wide-sweeping expeditions through which they discovered other pockets of survivors who also had carved out a rugged existence in the few places on the shattered, still-smoldering landscape that were capable of sustaining existence.

The Californians discovered more about what had happened to the Earth — how the rupture in the crust of the Earth had unleashed a toxic acidic volcanic soup that had made the oceans inhospitable to sea life, destroyed much of the Amazon rain forest, and triggered a new ice age that had been slowly transforming much of the planet into a frozen wasteland. Yet a decade after the asteroid impact, a decline in volcanic activity loomed as a bright spot on the horizon. As volcanic eruptions decreased in intensity and frequency, recovery began as sunlight began to penetrate the thinning ash clouds. And although conflicts and power struggles still beset some groups of people, most humans remained united in their common quest to create civilization anew. But their best intentions appeared threatened when the world’s largest super volcano began smoldering with increasing ferocity, signaling an eruption that this time could annihilate the human race.

But through a remarkable confluence of environmental forces the eruption ultimately precipitated a new Eden in one of the most unlikely places on the globe. Ark: Post-Asteroid Eden is a story of resilience and survival under appalling conditions, with human knowledge as the metaphorical Ark that rescues and perpetuates the best fragments of civilization.

Ark: Post-Asteroid Eden is the concluding installment in Thomas A. Cahill's apocalyptic "Ark Asteroid" science-fiction trilogy. It is the sequel to Cahill's 2012 novel

In 1994, he founded the UC Davis DELTA Group to investigate two areas of concern — aerosols and global climate change — for the National Science Foundation (NSF) and the National Oceanic and Atmospheric Administration (NOAA). Additionally his group analyzed aerosols and human health impacts for the California Air Resources Board, American Lung Association, and the Health Effects Task Force for Breathe California of Sacramento — Emigrant Trails. Because of this health-related work, a U.S. Department of Energy colleague asked Cahill and his team to evaluate air at the excavation project following the collapse of the World Trade Center towers in the autumn of 2001. Cahill was among the first to warn that workers at the site were at risk of serious health threats from the toxic metals in the air. Cahill was the author or co-author of hundreds of academic articles and book chapters. This was his fifth work of science fiction published under the EditPros LLC imprint.

In the autumn of 2018, about nine months after publication of his autobiography Critical Masses: Exposés of a Catholic Nuclear Physicist, Tom was diagnosed with myelodysplastic syndrome (MDS), a bone marrow failure disorder that interferes with the ability of the marrow to produce healthy blood cells. In the spirit of scientific inquiry, he took part in a clinical trial that helped slow but was unable to halt the progression of the disease. He died on May 1, 2019, at age 82.