One day in 1986, physicist Thomas Cahill was asked to scientifically analyze a pair of Levi's jeans that an American student had worn while visiting Kiev, Ukraine, only days after the disastrous explosion of a reactor at the nearby Chernobyl power plant. From the contaminated fibers in the pants, Cahill found that the amount of radiation that had been released into the atmosphere was at least 100 times greater than what the USSR had claimed — resulting in what likely was the single greatest population dose since Hiroshima. That was just one investigation in Cahill's colorfully varied career. The book cover depicts St. Andrew’s Church in Kiev.

Exposés of a Catholic Nuclear Physicist

"Critical Masses recognizes many of the wonderful people who have so enriched my life — as well as all the juicy parts that are left out of my academic CV." 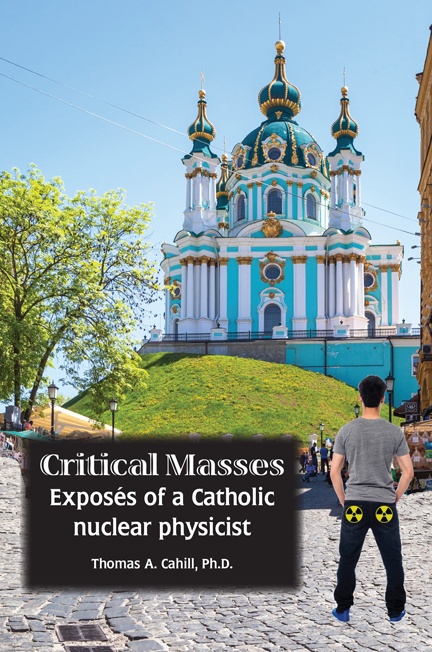 In the realm of science, Thomas A. Cahill, Ph.D., was a multifaceted gem, a man of intellectual curiosity, tenacity and spirituality with a rascally streak, an iconoclast who took almost mischievous delight in shredding hypocrisy. A nuclear and atomic physicist, Cahill taught, consulted and published widely during his 50-year career on an astonishingly diverse array of topics, including air quality, global warming, chemical pollution, ecosystem health and species extinctions. Cahill left his imprint on a broad array of projects, including components of the Pioneer 10 and Voyager spacecraft, adoption of regulations requiring use of automotive catalytic converters, chemical analysis of the Dead Sea Scrolls, protection of Mono Lake and preservation of visibility in national parks.

Dozens of key scientific findings with far-reaching implications for public health came from the inquisitive mind of a scientist who, as a youngster in the 1940s, lived with his family in the forested New England countryside in a creaky 1790-vintage farmhouse that had unreliable electrical service. He took square dancing lessons, was a ham radio operator, became an accomplished horseman, and helped tend to the family’s livestock — leading to his determination to become a veterinarian. All the while as a teenager he attended Catholic school and became an altar boy. That spiritual upbringing guided him throughout his career in academic science. With deliberation, he managed to reconcile the tenets of his enduring Catholic faith with his physics discipline, despite starkly contrasting sacred and scientific views about the origin of life and the nature of the universe.

That reconciliation forms the basis for Cahill’s autobiography, Critical Masses: Exposés of a Catholic Nuclear Physicist. In the book, Cahill revealed the previously undisclosed truth about what happened — and didn’t happen — at the World Trade Center disaster. He was pivotal in numerous environmental victories, capped by his work to secure $750 million in health care funding for first responders at the collapsed World Trade Center.

Two American presidents (and others) tried to shut down research by Cahill, who took pride in challenging bias and ignorance. Written with humor and spiced with previously untold stories, Critical Masses documents how he managed to simultaneously hold a “Q Clearance” at Los Alamos for “special nuclear materials” (the stuff that goes bang in critical mass for a nuclear chain reaction) while erroneously listed as an Arab nuclear physicist in a Middle Eastern inventory. Government officials in India mistook him for a CIA operative, while back at his nuclear lab in California he came into possession of a pair of radioactive Levi 501s that a student had worn while visiting Kiev four days after the Chernobyl disaster.

As a high school senior, Cahill had veered from his interest in veterinary medicine when he took a class in physics, about which he quickly developed an intense fascination. For a science fair project, he built a 9-foot-high van de Graaff electrostatic generator, which he entered into a competition that MIT sponsored. “I actually met and was encouraged by Professor van de Graaff himself, then at MIT, and I have always been grateful for the time he took to talk to a ‘green’ high school student. I have tried to retain that focus in my career,” Cahill said. As a sophomore undergraduate student at Holy Cross College in Boston in 1957, he switched his major from math to physics. “That very fall, Sputnik was launched. And so was I,” Cahill said.

The double meaning of the title Critical Masses pays tribute to Cahill’s “physical theology” philosophy in which he reconciles the Big Bang theory and modern science with his firm belief that the universe is the province of a caring creator, a conviction reinforced through the solace of Masses of which he partook under the most unlikely circumstances in remote locations throughout the world.

“I tried to have my scientific career guided with hopefully moral actions that on occasion went south big time,” acknowledged Cahill, whose CV lists his significant scientific publications. “I am using this autobiography as an opportunity to describe a number of events of modest national importance that have never been written down: the California versus U.S. EPA battle for the catalytic converter, fun and games at Mono Lake, how we won the battle of the Navajo coal-fired power plant at the Grand Canyon, and what really happened (and didn’t happen) at the World Trade Center, which, with my passing, could be lost.”

Cahill was convinced that the scientific method cannot be applied to decipher the existence of a “greater reality,” asserting that “we can only learn of the nature of the ‘greater reality’ through intelligent speculation: scientific, philosophical, or theological, conjecture guided by our native intelligence and the nature of the observable universe, unless the ‘greater reality’ chooses to intercede.” He explained why life could not exist in the universe without a precise set of conditions in alignment among 30 parameters of physics.

“Our ‘greater reality’ is not random, but is coded so that life and intelligence can evolve, given enough time and favorable conditions. One of the benefits of this approach is that no human can ever view the stars at night as simply a cold, sterile collection of hot plasma spheres. The celestial panorama is an enormous garden, a garden of life, a garden of intelligence, a garden of spirit,” Cahill wrote in the book. “The evolved creatures on other planets may not look like us physically but they and we have a level of intelligence that can discover the laws and secrets of the universe.”

In the autumn of 2018, about nine months after publication of Critical Masses, Tom was diagnosed with myelodysplastic syndrome (MDS), a bone marrow failure disorder that interferes with the ability of the marrow to produce healthy blood cells. In the spirit of scientific inquiry, he took part in a clinical trial that helped slow but was unable to halt the progression of the disease. He died on May 1, 2019, at age 82.

Tom typically spoke in rapid-fire sentences, spraying out bursts of words as his fertile mind percolated ideas and observations. Despite his eminence as a scientist, he was endearing and congenial, continually smiling and sharing anecdotes that tickled him. Tom's research studies and findings emanated from his abiding inquisitiveness, sense of adventure, seemingly unlimited energy and earnest desire to benefit humanity and all life and ecological systems on Earth.

Critical Masses: Exposés of a Catholic Nuclear Physicist is available as a trade paperback through Amazon.com, Barnes and Noble and other online sellers. It also can be ordered through any retail bookstore.