One Medicine War On Cancer

Gordon H. Theilen is among a handful of internationally renowned veterinary comparative medicine scientists who founded the discipline of veterinary oncology in the 1960s.

One Medicine War on Cancer

How Discoveries in Veterinary Oncology Led to Advancement in Comparative Medicine

Noted for his stubborn refusal to concede to the ravages of cancer in animals, Dr. Theilen made discoveries that contributed significantly to treatment of neoplastic diseases in humans. He has been a leader in combination cancer treatment, including chemotherapy, radiotherapy and immunotherapy. 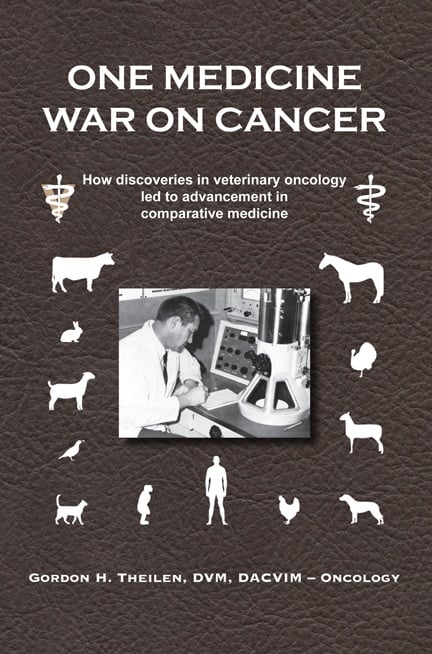 Working with researchers in human and veterinary medicine led Gordon H. Theilen, DVM, DACVIM, the world’s leading innovator in veterinary oncology and comparative cancer medicine, to the concept of One Medicine War on Cancer. This book describes the innovation of comparative cancer medicine that changed the course of how veterinarians deal with malignancies. Gordon H. Theilen, DVM, DACVIM-Oncology, and his colleagues were able to unlock the mystery of how neoplasia develops, through their research and discovery of RNA tumor viruses. Dr. Theilen documented the cause of acute developing tumors in turkeys, which he named reticuloendotheliosis (previously known as acute lymphomatosis). He was lead co-discoverer of feline sarcoma and simian sarcoma viruses. These three viruses contain oncogenes that are associated with various forms of human cancer. He studied leukemia in cats and cattle, which led to control and prevention of these retroviral infectious forms of cancer.

Working with researchers in human and veterinary medicine led to the concept of One Medicine War on Cancer. This book is a sequel to The Boy with the Wounded Thumb, an autobiography of the life of Dr. Theilen, from humble beginnings to fulfilling his desire to become a veterinarian. This second volume chronicles the scientific work, special education, and opportunities in which he was fortunate to participate at international centers, including the National Cancer Institute at the National Institutes of Health in Bethesda, Maryland, Royal Marsden Hospital in London, and Justus Liebig University, Giessen, Germany.

The legions of veterinary students whom Dr. Theilen taught during his four decades as a distinguished professor of surgical and radiological sciences at the University of California, Davis, School of Veterinary Medicine, have helped enrich veterinary comparative cancer medicine as an essential discipline in veterinary education.

Gordon H. Theilen, DVM, DACVIM (Diplomate of the American College of Veterinary Internal Medicine), one of the world’s most honored veterinary medicine research scientists and practitioners, is recognized as the progenitor of veterinary oncology. His groundbreaking research in cancer virology in the 1960s led to his establishment of the world’s first veterinary clinical oncology service.
In a remarkable career spanning four decades, Dr. Theilen conducted basic research on cancer-causing viruses in horses, turkeys, cows, cats, and primates. In 1965 he identified and named stem cell sarcoma in turkeys, Reticuloendotheliosis. In 1969, he co-discovered Synder-Theilen Feline Sarcoma Virus (ST-FeSV), and he discovered the first and only Simian Sarcoma Virus, SSV-1 (WMSV), in 1971. This discovery led to recognition on the cover of Cancer Research (volume 42, August 1982), a journal of the American Association for Cancer Research.
With contributions from colleagues, Dr. Theilen coauthored Veterinary Cancer Medicine, the world’s first reference textbook and definitive reference source on veterinary oncology. The legions of veterinary students whom he taught during his four decades as a distinguished professor of surgical and radiological sciences have helped entrench worldwide veterinary oncology as an essential discipline within veterinary medicine. Beginning in the 1970s, Dr. Theilen gradually turned his interest in hunting dogs and competitive field trials into a passion — breeding dogs through his Breton Kennels not for commercial gain, but rather to use genetic selection techniques to attain substantive improvements in the Brittany breed.
Buy now

One Medicine War on Cancer is available as a trade paperback through Amazon.com, Barnes and Noble and other online sellers. It also can be ordered through any retail bookstore.