The Testing Ground — The Cave

Farid injected the attack virus… One by one, the local bank branches in Davis, California, were infected – Bank of America, Chase, Citibank, First Northern, Union, US Bank, and Wells Fargo. As the bank computers talked to other branches within California, the virus spread as their firewall were breached… The jump across the Atlantic and Pacific Oceans took a mere millisecond, as one by one the financial institutions of the world were fatally impacted.

The Testing Ground — The Cave

Volume 1 of the Testing Ground Trilogy

Little by little some homes in certain neighborhoods were identified as having confirmed food storage. These homes became magnets to the hungry and thirsty mobs, which demanded what they called “their share,” and when none was shared, the outsiders broke into the homes, murdered the residents, and stole the supplies. Later, the thugs fought each other for larger shares of the food.

An e-book by LOUIS EVAN GRIVETTI and
SARGENT THURBER REYNOLDS 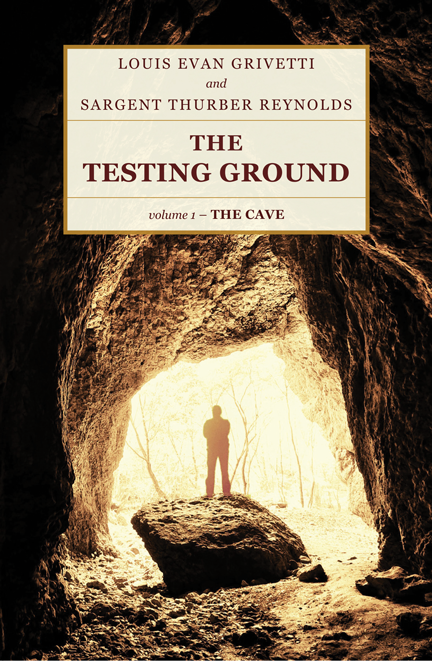 Searching for an inhabitable planet, crew members of the KosMa ExPlorer discover an uncharted orb similar to their distant home. During regional exploration they locate a cave that contains artifacts and materials documenting the history and apparent demise of intelligent bipeds. These objects cryptically describe the planet’s sequential life forms, from simple to highly complex civilizations. Each of the life forms was created by the Great Spirit Etowah, a cosmic force that assigns an Observer and Overseer team to impassively record, evaluate, and then recommend continuation or extermination.

One cave document contains a simple, explicit warning from Etowah to the planet’s bipeds: either abide by my seven commandments, or suffer extermination. Another find, an expansive memorandum, chronicles the sequence of events when a terrorist computer hacker implemented a plan that succeeded far beyond his expectations to bring down the American banking and economic system. Once the computer virus was launched subsequent events spiraled wildly out of control, producing what became known as the "Ripple Event," which precipitated hunger, thirst and anarchy among the survivors. Unimaginable chaos followed. During that chaotic period that became known as the "Dark Time," unique individual and communal survival strategies slowly emerged at the various isolated settlement groups.

But even during this difficult recovery phase some bipeds continued to ignore Etowah’s commandments. Will the actions of these few trigger a final catastrophic mass extinction? Is the unnamed planet merely a convenient, personal cosmic setting for Etowah’s amusement, a testing ground upon which life forms are created, managed and eliminated, where cyclical extinction patterns reflect cosmic indifference? What will be the future of the planets bipeds: survival or extermination?

Ponder the events as they transpire in the pages of The Testing Ground, Volume 1: The Cave. Are personal, family, and national security assured or mere illusions? What would you do if at tomorrow’s dawn you and your family unexpectedly and inexplicably lose access to computers, money and negotiable funds, electricity and limited water supplies? How would you find out what happened if basic communication and inter-regional transportation networks are inoperative? How would you secure food and drink for yourself and your family after home and local supplies are exhausted? How will you protect yourself and your family from the anarchy, violence and mob rule sure to follow?  Those and innumerable other obstacles confront individuals, families and communities struggling for survival in one geographical region of The Testing Ground. Would the difficult personal and group decisions that they make be your decisions as well? Will the planet’s bipeds survive or face extinction on The Testing Ground?

Louis Evan Grivetti is a professor emeritus in the Department of Nutrition, University of California, Davis (UC Davis). He received his bachelor's and master's degrees in paleontology at UC Berkeley (thesis: Intertidal Foraminifera of the Farallon Islands) and his Ph.D. in geography at UC Davis (dissertation: Dietary Resources and Social Aspects of Food Use in a Tswana Tribe). His academic research specializations have included cultural and historical geography, domestication of plants and animals; food history; and wild plant use during drought and civil unrest or war — with implications for health and nutritional status.

Sargent Thurber Reynolds is a retired technician for Valley Toxicology, and exploration geologist and consultant with Reynolds, Bain and Reynolds, and Tri-Valley Oil & Gas Co. He received his bachelor's and master's degrees in geology at UC Berkeley (thesis: Geology of the North Half Bannack Quadrangle, Beaverhead County, Montana), with a secondary credential at National University. He is an ardent angler, past president of the Fly Fishers of Davis, Calif., and past president of the Northern California Council Federation of Fly Fishers.

Both authors have lived and worked extensively within the western, central, eastern, and southern regions of North America, and have lived, traveled, or worked in the Middle East. The Testing Ground volumes represent their initial literary collaboration.