The Testing Ground — The Journey

“On two occasions when out gathering firewood in the early morning, I glimpsed brief movements just inside the tree-line shadow areas. On other occasions, I saw human footprints in the sandy bottom of the more remote coulee twists. I could not be certain that the tracks were recent, or that the rustling of shadows among the scrub pine and cottonwoods were from others like us. Perhaps they were Wanderers, taking shelter in the breaks. If so, we had to be on alert throughout the day and night.”

The Testing Ground — The Journey

Volume 2 of the Testing Ground Trilogy

Reese and Travis Saunders, a married couple who had lived their childhoods during the fading years of the Dark Time, found themselves the sole survivors of a mysterious epidemic that had claimed the lives of everyone else in their isolated Montana settlement. "Why were we alive?" Reese wondered. Neither she nor Travis had any answers, so they set out on a quest to learn the truth.

An e-book by LOUIS EVAN GRIVETTI and
SARGENT THURBER REYNOLDS 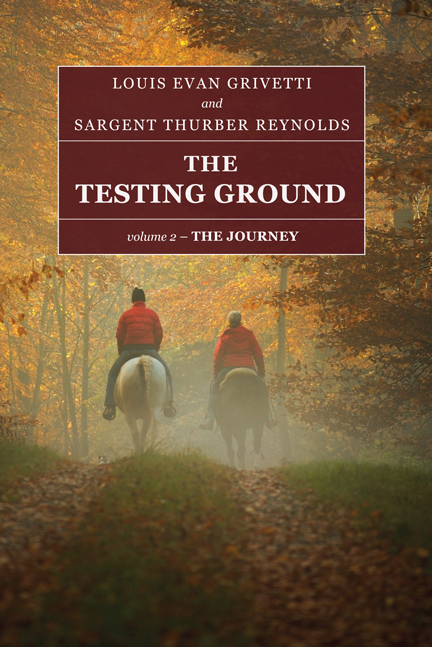 The Testing Ground — The Journey traces the cross-continental trek of Travis and Reese Saunders, survivors of a lethal virus that destroyed human life in much of the American continent. In this continuation of the saga that began with The Testing Ground — The Cave, the couple leaves their home in the Big Hole Valley of Montana to search for survivors.

On horseback, river passage, and on foot they make their way across the continent, following the headwaters of the Missouri River to the junction with the Mississippi River and the ruins of former St. Louis. Along the route they encounter small groups of survivors who relate stories of hardships, misery, and survival — accounts that reaffirm the resilience of human dignity even in the face of terrible ecological and health-related disasters.

They pass through communities where the virus eliminated most of the population, leaving hard-working survivors who adjusted and worked together for the recovery of their communities. They travel on through the mountainous terrain of the Virginias and ultimately reach the ruins of Washington, D.C., where madness reigned during the Ripple and Dark Time, leaving the once-proud city a nuclear wasteland.

What they observe, learn, and experience during their journey ultimately forces a decision to return to their previous home in the Big Hole Valley. Upon reaching their destination, the travelers are confronted with an unexpected reality: extraterrestrial inhabitants have settled in northwestern North America, and humans are no longer the only bipeds that occupy the Testing Ground.

Louis Evan Grivetti is a professor emeritus in the Department of Nutrition, University of California, Davis (UC Davis). He received his bachelor's and master's degrees in paleontology at UC Berkeley (thesis: Intertidal Foraminifera of the Farallon Islands) and his Ph.D. in geography at UC Davis (dissertation: Dietary Resources and Social Aspects of Food Use in a Tswana Tribe). His academic research specializations have included cultural and historical geography, domestication of plants and animals; food history; and wild plant use during drought and civil unrest or war — with implications for health and nutritional status.

Sargent Thurber Reynolds is a retired technician for Valley Toxicology, and exploration geologist and consultant with Reynolds, Bain and Reynolds, and Tri-Valley Oil & Gas Co. He received his bachelor's and master's degrees in geology at UC Berkeley (thesis: Geology of the North Half Bannack Quadrangle, Beaverhead County, Montana), with a secondary credential at National University. He is an ardent angler, past president of the Fly Fishers of Davis, Calif., and past president of the Northern California Council Federation of Fly Fishers.

Both authors have lived and worked extensively within the western, central, eastern, and southern regions of North America, and have lived, traveled, or worked in the Middle East. The Testing Ground volumes represent their initial literary collaboration.