"It was September 22, 1993. I had been in a horrific, grinding crash, about which I have no recollection. They told me that rescue workers took about 30 minutes to peel the wreckage apart and extricate me, before I was loaded onto a medevac helicopter."

Within My Grasp: A Double Amputee's True Story 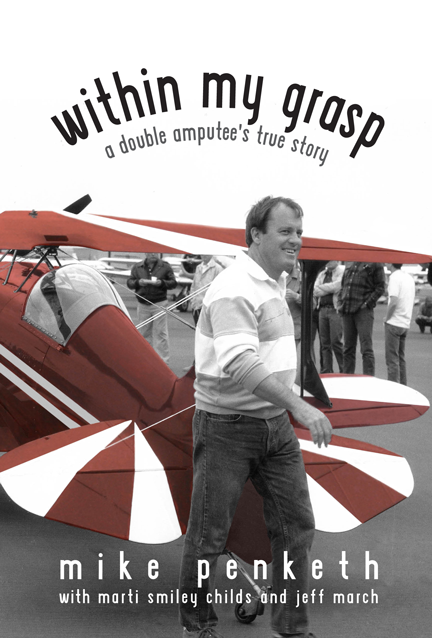 American Airlines Captain Mike Penketh maintained a perfect safety record while flying passengers, but on his own time he got his adrenaline rushes by mastering aerobatics and flying in competitions. He raced his homebuilt Pitts S-1 biplane in the Reno Air Races. In his quest for speed, he miscalculated only once – and he paid dearly.
"I didn't know where I was, and I didn't know the guy who was leaning over me. I had been unconscious, and I was flat on my back, but as I began awakening in a groggy, dull fog, I sensed that I was in some kind of aircraft. Over the noise, the pilot spoke. He was talking about a patient with severe limb damage and a possible head injury," Mike wrote in the opening chapter of the book. "The pilot was contacting the radio dispatch room at the University of Utah Hospital Trauma Services Unit in Salt Lake City. I did not comprehend that I was the patient. Everything revolved in slow motion around me. I felt cold, numb. And then I blacked out again."
Trauma surgeons subsequently were forced to amputate Mike's hands following a horrific accident that nearly killed him. Although the course of his life was unalterably changed, he was determined against all odds to fly airplanes again. Within a remarkably short time of losing his hands, Mike became determined to resume flying airplanes. He was fitted for and tried numerous hook devices and prosthetic arms before his relentless pursuit led him to a technologically advanced solution with which he was able to perform some critical hand functions.
He culminated two years of preparations when he successfully demonstrated for doubting FAA examiners his ability to fly an aircraft using electronic prosthetic hands. The FAA reinstated his pilot's license and, while he never flew Boeing 737s again, he went on to perform intricate maneuvers in aerobatics shows to prove to himself and the naysayers that he could do it. Mike, working in collaboration with Marti Smiley Childs and Jeff March, tells his story in Within My Grasp: A Double Amputee's True Story. It is an inspirational autobiography about the challenges of coping with a disability, and learning how to focus on what you can do, rather than what you cannot do. That philosophy constitutes a prominent part of Mike's legacy.
Buy now

Within My Grasp: A Double Amputee's True Story is available as a trade paperback through Amazon.com, Barnes and Noble and other online sellers. It also is available in digital (e-book) form for Amazon Kindle, Barnes & Noble Nook, Apple iPad and other electronic tablets.

It's available from local bookstores and from