The Boy with the Wounded Thumb

This book is about much more than the severe thumb laceration that turned out to be a life-changing event for a 5-year-old boy. It is about what happened 22 years hence, when Gordon Theilen obtained his degree in veterinary medicine, inspired by the rural veterinarian who treated and saved his thumb. Even as Dr. Theilen set out on a career as a young veterinary clinician, he could not foresee that he would follow a path into veterinary research that would lead him to participate in waging multidisciplinary “one medicine war” on cancer.

The Boy with the Wounded Thumb

“I was born at the end of the Roaring Twenties, and the Great Depression enveloped most of my childhood years. I was a jaundiced newborn, yellow as a banana, for the first month after my birth. Women in those days were required to stay in bed in the hospital for seven days after giving birth, so my first week of life was spent in the Montevideo, Minnesota, hospital.” 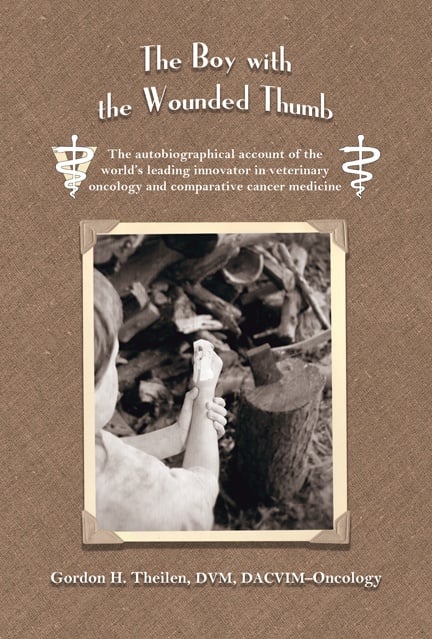 The Boy with the Wounded Thumb is the autobiographical account of the world’s leading innovator in veterinary oncology and comparative cancer medicine: Gordon H. Theilen, DVM, DACVIM-Oncology. Dr. Theilen is among a handful of internationally renowned veterinary comparative scientists who founded the discipline of veterinary oncology in the 1960s. Noted for his stubborn refusal to concede to the ravages of cancer in animals, Dr. Theilen made discoveries that contributed significantly to treatment of neoplastic diseases in humans. He has been a leader in combination cancer treatment, including chemotherapy, radiotherapy and immunotherapy.
The book, which Theilen dedicates to “initiators of new wisdom to benefit humans and animals,” describes his Depression-era childhood in rural Minnesota as the son of sharecropping farmers, how the numerous injuries he sustained throughout his rough-and-tumble youth piqued his interest in physiology and medicine, and how a disparaging, scornful high school teacher only steeled his determination to pursue admission to the University of California. The Boy with the Wounded Thumb is laced with humor, as he recalls hijinks and escapades of his youth that helped bolster him through emotionally and economically difficult times.
He tells of his detour as a novice large-animal veterinarian in Tillamook, Oregon, following his graduation from the University of California, Davis, School of Veterinary Medicine in 1955. It was there, while helping cows give birth and treating ailing goats and other farm animals that he realized his true calling was teaching. When his veterinary alma mater called, he joined the UC Davis faculty. There Theilen made his mark, not only as an excellent teacher but as a pioneering researcher whose discoveries about oncogenic disease sent ripples throughout the human and veterinary medical sciences communities worldwide.
All the while, he unwittingly became a witness to the ravages of multiple sclerosis, with which his wife, Carolyn, has grappled for four decades. He has become an advocate of immunotherapy to treat MS, and the couple has found strength in prayer as a means to cope with the neurological effects of the degenerative disease.

Theilen stepped away from his 37-year career when he retired in 1993. His companion book, One Medicine War on Cancer: How Discoveries in Veterinary Oncology Led to Advancement in Comparative Medicine, focuses on his clinical career and his scholarly research and findings that brought him worldwide scientific recognition as well as the admiration, respect and gratitude of generations of veterinary students. 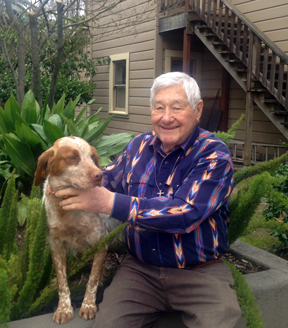 Gordon H. Theilen, DVM, DACVIM (Diplomate of the American College of Veterinary Internal Medicine), one of the world’s most honored veterinary medicine research scientists and practitioners, is recognized as the progenitor of veterinary oncology. His groundbreaking research in cancer virology in the 1960s led to his establishment of the world’s first veterinary clinical oncology service. With contributions from colleagues, Dr. Theilen coauthored Veterinary Cancer Medicine, the world’s first reference textbook and definitive reference source on veterinary oncology. The legions of veterinary students whom he taught during his four decades as a distinguished professor of surgical and radiological sciences have helped entrench worldwide veterinary oncology as an essential discipline within veterinary medicine.
Beginning in the 1970s, Dr. Theilen gradually turned his interest in hunting dogs and competitive field trials into a passion — breeding dogs through his Breton Kennels not for commercial gain, but rather to use genetic selection techniques to attain substantive improvements in the Brittany breed.  Theilen is seen here with his dual champion Breton’s Sam I Am. “Sam” is a seventh-generation roan-colored Brittany selected from the first in the Theilens’ breeding line. (Photo by Marti Smiley Childs.)

The Boy with the Wounded Thumb is available as a trade paperback through Amazon.com, Barnes and Noble and other online sellers. It also can be ordered through any retail bookstore.